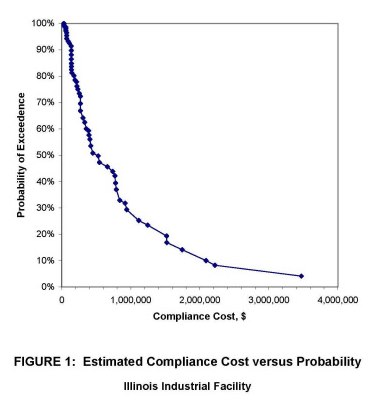 Environmental consultants measure the probability of total costs of compliance.

This project was concerned with potential environmental liabilities at a large chemical processing and distribution facility in central Illinois. A Phase I ESA determined that there were twelve recognized environmental conditions, including former and current production and handling areas. A Phase II ESA determined that there was soil and groundwater contamination throughout the facility. There was no history of prior regulatory compliance related to the soil and groundwater contamination.

Potential compliance costs were estimated using the expected value method described in the Standard Guide for Estimating Monetary Costs and Liabilities for Environmental Matters (ASTM E 2137-06). This involves estimating costs for a range of scenarios, plus the probability of each scenario. The expected value is considered to be the mean value of the probability-weighted costs.